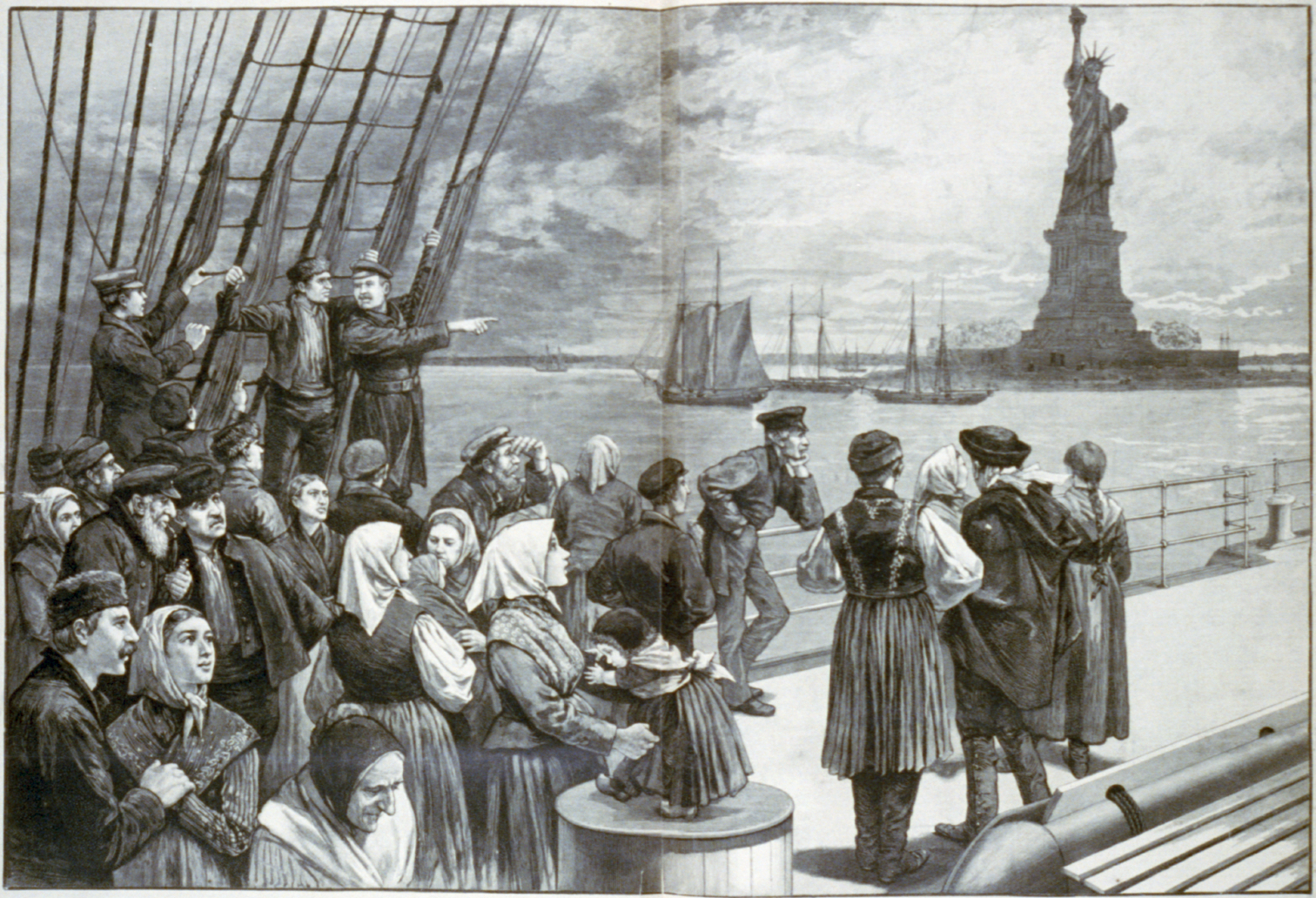 Immigration has been a part of American history for since the continent was discovered.  This page will provide an overview of immigration trends in the United States from its earliest days to today.

The first English colony was founded at Jamestown in Virginia in 1607.  Over the next 175 years, a series of colonies were established along the Eastern Coast of North America and eventually taken over by the British.  During this period most of the settlers came from Northern Europe:  England, Wales, Scotland, the Netherlands, and Germany.  Most of these came to farm the wide open expanses of the New World, while those could not afford the fare across the sea came as indentured servants.  Others arrived in the Colonies against their will:  over 60,000 convicts were sent to Georgia during the 18th century and the first African slaves were brought by the Dutch to Virginia in 1619.

The Immigration Era began towards the middle of the 19th century, when large influxes of newcomers raised tensions in American society.  The Native American Party, or Know Nothings, was founded in response to the large numbers of Irish Catholics who came to America fleeing the Potato Famine in the first large waive of immigrant arrivals.  It was also around this time that millions of Germans began immigrating to the United States.  Chinese and other Asians arrived to California to work in the gold fields and on the railroad.  Towards the end of the century, the main immigrant groups arriving in the United States were Eastern European Jews and Italians.

This was the era in which the concept of the United States as a "melting pot" was developed.  There was a great pressure on immigrants to assimilate and become "real" Americans.  Non-whites faced the greatest discrimination. The Chinese Exclusion Act of 1882 banned all Chinese from immigrating to the United States.  It would not be repealed until 1943.

The 20th Century was a time of great change in immigration policy.  The first few decades greatly resembled that of the late 19th century. Immigration peaked in 1907, when over a million people moved to the United States; however, starting in 1917, new laws began drastically reducing the number of immigrants allowed into the country as well as limiting the countries they could come from. These laws effectively limited immigration to people from Northwestern Europe.

The end of World War II brought new waves of immigrants to the United States, as refugees fled their shattered homelands.  The Displaced Persons Act of 1948 allowed stateless refugees to immigrate as long as they had a sponsor.  Additional quotas for refugees were added over the years as the Cold War heated up.  Immigration from Asia was also liberalized during this time. The biggest policy change came in 1965, when the Hart-Celler Act, part of President Johnson's Great Society, abolished quotas and racial barriers all together.

The presence of illegal aliens of Mexican heritage had always been tolerated to one degree or another depending on the economy:  when times were good they were welcome, and when times were bad they were not—however, nothing the US government could do was able to prevent those who wanted to work in the US from coming. The Immigration Reform and Control Act of 1986 attempted to find solutions:  it made it illegal to knowingly hire illegal labor while also providing an amnesty for around three million illegal residents of the United States.  Ultimately, though, this act was no more effective at controlling illegal immigration than any of its predecessors, and the quest for a better immigration policy started up again within a few years.

Immigration in the 21st century was a continuation of the ineffective reforms of the previous century.  Both President Bush and President Obama attempted to pass immigration reform and failed.   As a result of his frustration, President Obama issued an executive order in 2012, the Deferred Action for Childhood Arrivals (DACA), which allowed children who had been brought illegally to the United States to gain renewable temporary work permits.  As of today, the country appears no closer to providing a solution to the problem than it ever has.

Another controversial immigration issue of the century has been H-1B visas, which allows employers the right to bring over workers to the United States to work in specialized professions.  However, there is the perception that it is abused, particularly by tech companies, to bring in cheaper workers from Asia and avoid having the higher salaries demanded by similarly qualified American workers. It is also seen as a back way in to immigrate, because although it is officially a non-immigration visa, many companies promise H-1B visa holders that they will support their future petitions for green card status.